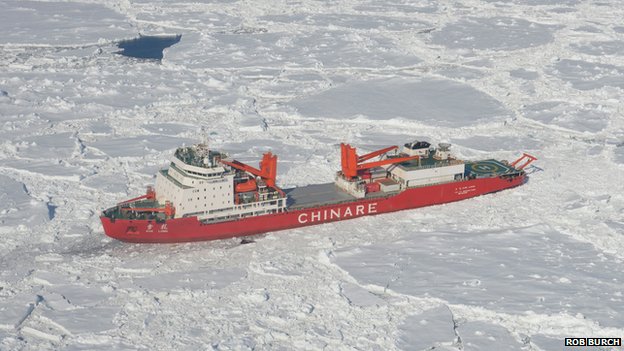 The Chinese vessel, Xue Long, has confirmed fears that it has also become stuck in the ice
Continue reading the main storytchtarctic passengers flown from shipres: Ice-bound ship

The Chinese ice-breaker that helped rescue passengers stranded on the Akademik Shokalskiy vessel in Antarctica is now stuck itself.

An Australian ice-breaker carrying the rescued passengers is no longer on standby and is returning to shore.

On Thursday, a helicopter from the Chinese ship, Xue Long, transferred 52 passengers from the Akademik Shokalskiy to the Aurora Australis.

The Russian boat has been trapped by thick floes of ice since 24 December.

"Xue Long's attempt to manoeuvre through the ice... was unsuccessful. Xue Long has confirmed to the Australian Maritime Safety Authority (Amsa) [that] it is beset by ice," Amsa said in a statement on Saturday.

"The master of Xue Long has confirmed to Amsa that the ship is safe, it is not in distress and does not require assistance at this time," Amsa said, adding that there was no immediate danger to the ice-breaker's crew.

It is the latest twist in what has become a complicated rescue operation in the Antarctic.

BBC reporter Andrew Luck-Baker, who is on board the Aurora Australis, said: "The irony of the situation is that the Xue Long was originally summoned to break a clear route through the pack ice to the smaller Russian vessel. That was not possible and the large icebreaker is now trapped itself."

The Australian Aurora Australis had been asked to remain in open water nearby in case the Xue Long needed help - but Amsa said this was no longer needed and it had been released from its search and rescue mission.

The authority added that the Australian vessel was travelling to the Casey research base on the Windmill Islands, just outside the Antarctic Circle, to complete a re-supply task before continuing to Hobart - the capital of the Australian state of Tasmania.

Andrew Peacock, an Australian doctor and photographer who was rescued from the Russian ship, spoke of his fellow passengers' frustration aboard the Aurora over the latest delay in their journey home, according to the Associated Press.

"So our time down south is not over yet and we are going to be delayed in our return to friends and family by some time yet, which is frustrating," Mr Peacock said before the Aurora was given permission to continue. 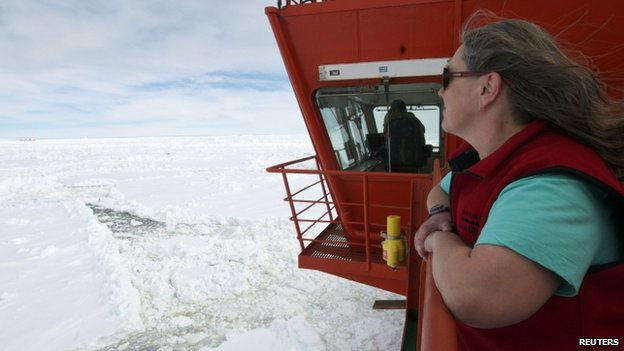 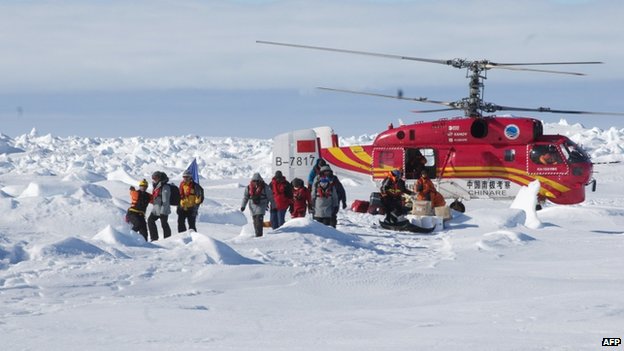 A helicopter from the Chinese Xue Long transported the passengers 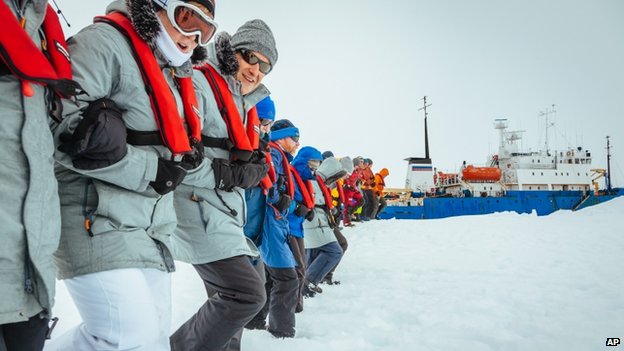 The vessel was being used by the Australasian Antarctic Expedition (AAE) 2013 to follow the route explorer Douglas Mawson travelled a century ago.

Several attempts to break through to the ship by sea - by the Xue Long, Aurora Australis and French-flagged L'Astrolabe - failed because of the thickness of the ice.

The team on board said the ship was stocked with food and was in no danger.

On Thursday, a helicopter from the Xue Long managed to fly the Shokalskiy's passengers and researchers in groups to an ice floe next to the Aurora Australis.

They were then ferried to the Aurora Australis by a small boat.

Most of the Russian crew-members are staying on board the Akademik Shokalskiy until the vessel is able to reach open water.

Members of the AAE have paid tribute to the Chinese captain, Jianzhong Wang, and his crew.

Prof Tracey Rogers, a marine biologist at the University of New South Wales, praised the helicopter evacuation team that made five separate flights to ferry the AAE members from the stranded Shokalskiy to a makeshift helipad close to the Aurora Australis.

"Under really difficult circumstances, they were efficient, fast and so well coordinated," she said.

Prof Chris Turney, co-leader of the AAE 2013, said he was sorry to hear that the Xue Long was now in difficulty: "We are hoping that they, along with the crew of the Shokalskiy, will be free as soon as possible."

There are 111 individuals on the Xue Long and 22 remaining crew on the Shokalskiy. 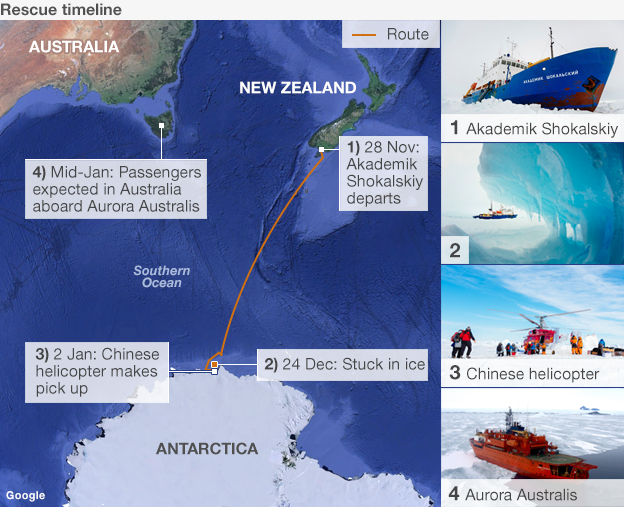